Authored by Brandon Smith via Alt-Market.com,

Most people are familiar with the tale of the Ant And The Grasshopper, an ancient fable about a grasshopper who spends the fruitful months of spring and summer in idle recreation, dancing and playing carelessly while the industrious ant works tirelessly to prepare for what he knows will be a harsh winter. In many versions the Grasshopper harasses the Ant, criticizing him for wasting so much time on work when he could be out enjoying himself in the sun. 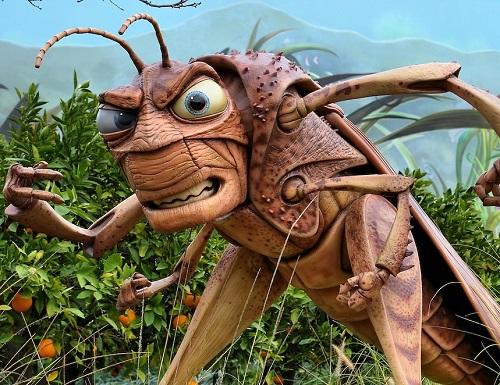 Eventually, winter does arrive and it is as brutal as the Ant had predicted. Not surprisingly, the carefree Grasshopper finds himself cold and starving with no supplies, begging the Ant to share the bounty he had worked so hard to procure over the summer. The Ant refuses, telling the Grasshopper he can “dance the winter away, now….”

What many people do not know is that there is also a decidedly more socialist version of The Ant And The Grasshopper written by a French poet named Jean de La Fontaine in which the Ant is portrayed as the bad guy, and his industry as “mean spirited”. And here in this little fable we have represented one of the greatest conflicts of our modern era:

Now, in the versions I read as a child the ant did not just work diligently while ignoring the grasshopper; he consistently tried to warn the grasshopper that winter was coming, but the grasshopper was incredulous. And, I have to say if we apply this fable as an allegory to our current situation in the middle of a pandemic and economic collapse the ants (preppers) have been LOUDLY pleading with the grasshoppers to stock supplies because a crisis event on a national and global scale was inevitable.

Our industry has hardly been mean spirited; we gave other people every chance to see the danger and prepare. We tried to save them. We went above and beyond. Yet, some grasshoppers out there now claim that this is not enough.  They want a sacrifice…

Over the past couple weeks we have seen an avalanche of articles which label people stocking supplies as “hoarders”, not to mention a number of bizarre arguments by economists on why stockpiling goods is “bad for the economy”. Even Donald Trump has been telling Americans to “stop hoarding supplies” and to have faith that food will still be in the stores weeks from now.  Preppers are being accused as the main culprits behind the rush.

I would point out that the vast majority of people that are suddenly rushing to stores to load up on goods during the crisis are NOT really preppers. Preppers were already equipped for this event months or years in advance. Preppers were buying their their extra supplies two or three months ago when they first heard about the virus threat. We all knew what this meant not just for public health, but the economy overall.

The current narrative is essentially lumping together all the people who have stockpiled goods meticulously over years in with people who raced to Costco a few days ago to buy all the toilet paper, and I think this is a deliberate misrepresentation.

I would also point out that gun stores, dealing with a massive influx of new firearms owners purchasing whatever they can find as the situation becomes more grim, are also reporting that the majority of these people are Democrats and leftists that were previously “anti-gun”. Many of these people have never even fired a gun in their lives. This is not to say that all preppers are conservative and all the panic buyers are leftists, but I think the evidence suggests that there are far more on the left that are unprepared, and this is where we start to run into problems.

I don’t condemn people who raced out to buy supplies the past week, I’m glad they did because that buys the country a little more time before the REAL panic starts. However, we need to be practical and accept that many of these folks are inexperienced in preparedness and think that buying an extra cartload of food is going to save them. I can’t tell you how many times I’ve heard this phrase from people in the past couple days:

This is a serious disconnect from reality. It shows that these people are hyperfocused on the virus alone, they actually believe the rumors that the virus will be gone as spring floats in and they are completely oblivious to the economic collapse that is happening while the pandemic is developing. They really do think this will all be over before their meager supply of goods from Costco runs out.

These are the people I feel bad for, because at least they were trying. These are not the grasshoppers, they have simply been misled.

Trump’s latest announcement that he hopes to have lockdowns lifted and the economy up and running “by Easter” is just one in a long line of false hope headlines in the mainstream; and people desperately want to believe it.  After only a week of restrictions in some states and two weeks of rushes on the grocery stores, many in the public are already on edge about their situation.  This is because many Americans are living paycheck to paycheck with almost no safety net, and those that do have a safety net are secure for two or three weeks at most.  They are looking down a long dark train tunnel and they can hear a whistle in the distance.

The demands for America to “go back to work” are going to boil over in the next couple of weeks, and this is completely understandable.  However, it’s not going to happen.

With the US about two weeks behind Europe, the pandemic is only getting started here.  The spike in confirmed cases is due to massive increase in testing, but the deaths will accelerate as the infection settles in and takes its toll over the course of the next month.  I see little chance that the contagion will burn out in April.  But if the elites want to reassert the “need for lockdowns”, they might lift them for a time, only to create a resurgence of new cases and then bring back restrictions with even more force than before.

This is how all major crisis events tend to be handled by governments in history – the populace is told that the danger will pass in weeks and to hunker down until then.  After a couple of weeks, the government announces again that we are almost there, just a couple more weeks.  In the meantime, martial law-like measures and assets are being moved into place incrementally, because the authorities never intended to lift restrictions at all.  Governments seek to keep people passive until they are positioned to more effectively control them.  Once they are, the mask comes off and all the empty reassurances disappear.

This would also build up the hopes of the public only to abruptly dash them against the rocks, and when people realize this event is going to continue for months to come, THAT is when they will truly lose their composure.  At this stage, there are those who will be desperate and will seek aid from government, then there will be those that become enraged and demand that supplies be taken from other people they don’t like in order to fill their own bellies.

The grasshoppers are people that not only attacked preppers as “doom mongers” for years, not only refused to stock their own supplies during the coronavirus event, but they are also the same people that now are taking to social media to throw salt at preppers (ants) who now say “We told you so…”, and the grasshoppers want to make the ants pay by demanding their supplies be taken and redistributed.

How dare we call out the grasshoppers for their imprudence and their hypocrisy, right?

Does it help to say “I told you so”? Absolutely. Shaming people for making stupid decisions and for putting themselves and others at risk because of their stupid decisions is a hallmark of human survival that has been discouraged by the mainstream in the past decade. It needs to make a comeback.

The socialist grasshopper narrative is starting to pop up everywhere on the web these days, though I think it will not gain steam for another month when people finally realize the crisis is not going to be over anytime soon. The ants will be accused of being the bad guys, but we always knew this was a possibility, and we have prepared for that as well.

Here’s the issue; our labor is one of the few things we truly own from birth, and according to the constitution we are supposed to own it outright. If you plan to steal or “redistribute” the labor of others, then you are making them into slaves. You are using their work to support people who did not earn it and often times don’t deserve it.

And yes, I realize that this kind of exploitation of the productive class is going on today, and that is something that needs to be undone, but what I am talking about is full blown confiscation and redistribution.  People think things are bad now?  They haven’t seen anything yet.

If grasshoppers want to maintain the moral high ground, then they can appeal to prepared people and their sense of charity, which I myself have done on occasion. I do not think that preppers should turn away every single person in need of help, but it has to be THEIR CHOICE, not an imperative forced at gunpoint. If they refuse then that is their decision and it does not make them a villain. They are merely reaping the benefits of their own struggles, their own blood, sweat and tears.

The grasshoppers do not care about any of this, though. They feel they are entitled to a livelihood and to comfort even if they did not work for it, and they are happy to take it from others if they can, or even better, they are happy for the government to steal for them.

Mark my words, give it a month or two and these people are going to start swarming in droves like locusts. They are vicious narcissists, their pride has been damaged and they are out to prove that even though preppers were right, we are still wrong because now we are going to be forced to feed the same grasshoppers that used to tell us our prepping was pointless. That will teach us!

Of course, I don’t think they comprehend the measure of response from the ants. Many of us plan to fight back, and frankly we do not care who our opponent is or how well equipped they are. If you come to pirate our livelihood and labor and claim it as your property, then we plan to take as many grasshoppers down as possible in the process.

My suggestion to the grasshoppers? Learn how to plant and farm quick, because you are not going to get anything from us for free, and trying will only start a war. Maybe, if you ask nicely, we’ll even teach you how to provide for yourselves.