Unbelievable as it sounds at a moment local and state police are in many instances imposing draconian measures limiting citizens’ movement across state borders, and in some instances fining them for not wearing virus protective face gear, as well as ticketing small businesses for alleged price gouging, this one has slipped past authorities, apparently:

Medical marketing companies offering coronavirus tests, including one that promises results in 24 hours, have charged people up to $250 per test.

We should also note this seems an incredibly dangerous threat to public safety, given scammers posing as medical professionals administering ‘fake COVID-19 tests’ on people showing up with symptoms itself increases the likelihood of local spread.

No doubt the scammers are not at all following safe health protocol like changing over gloves and strict sanitization procedures, so the presumed ‘test’ itself could spread the virus.

“Metro Council President David James and several local advocates have been hunting down a group they say are fake COVID-19 testers,” local media reports say further of the group, which has been in the state before conducting similar medical-related scams. “So far, James said the scammers have set up pop-up drive-thru testing tents at Wayside Christian Mission, Sojourn Church and at Broadway and 17th Street.”

“It’s a scam,” James said. “They couldn’t even spell HIPAA right on their name tags!” He further said of the health risks posed by the unique new con:

“They would test somebody and use the same gloves they used on the person before. They get your $240 dollars plus they can turn in fake Medicaid claims.”

Some states have begun issuing warnings against fraudulent test sites, such as Indiana which also recently saw some examples. Kentucky and others have begun requiring that test sites and labs be approved to work with the state.

A spokeswoman for Mayor Greg Fischer’s office said that the city has received calls about multiple pop-up testing sites and that police are investigating for “further review and possible action.”

“At this time, we are advising residents experiencing symptoms to seek COVID-19 testing from hospitals, health care providers or government resources,” Louisville city spokeswoman Jessica Wethington said after the fraudulent activity was exposed. 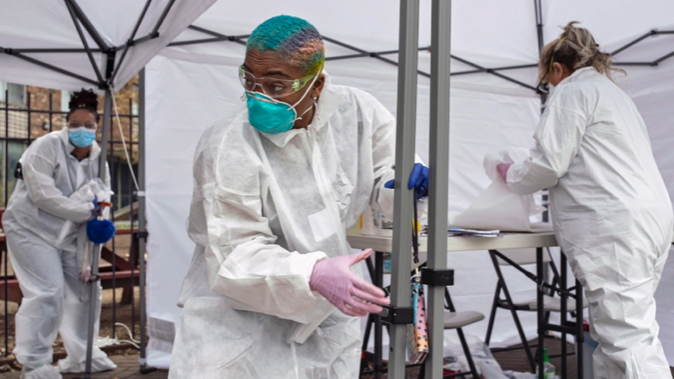 And one local advocate, Tara Bassett, who’s been investigative the group said they’d been run out of town on prior occasions.

“They showed up again in late February, early March and I actually ambushed interviewed one of the guys that’s still on this team,” Bassett said. “They’re the scum of the earth and they’re preying on the poorest of the poor and I’m going to do everything in my power to get them the hell out of Kentucky.”