Generally speaking, the worst-hit states along the American Sun Belt, including Texas, Arizona, Florida and California, have seen new cases and hospitalizations decline. But across Texas, where deaths are just beginning to peak, some of the areas with the highest mortality rates are among the poorest and most rural in the state.

In a feature piece published Wednesday, the Associated Press sent a team of reporters and photographers to Hidalgo County, part of Texas’ sparsely populated borderland. 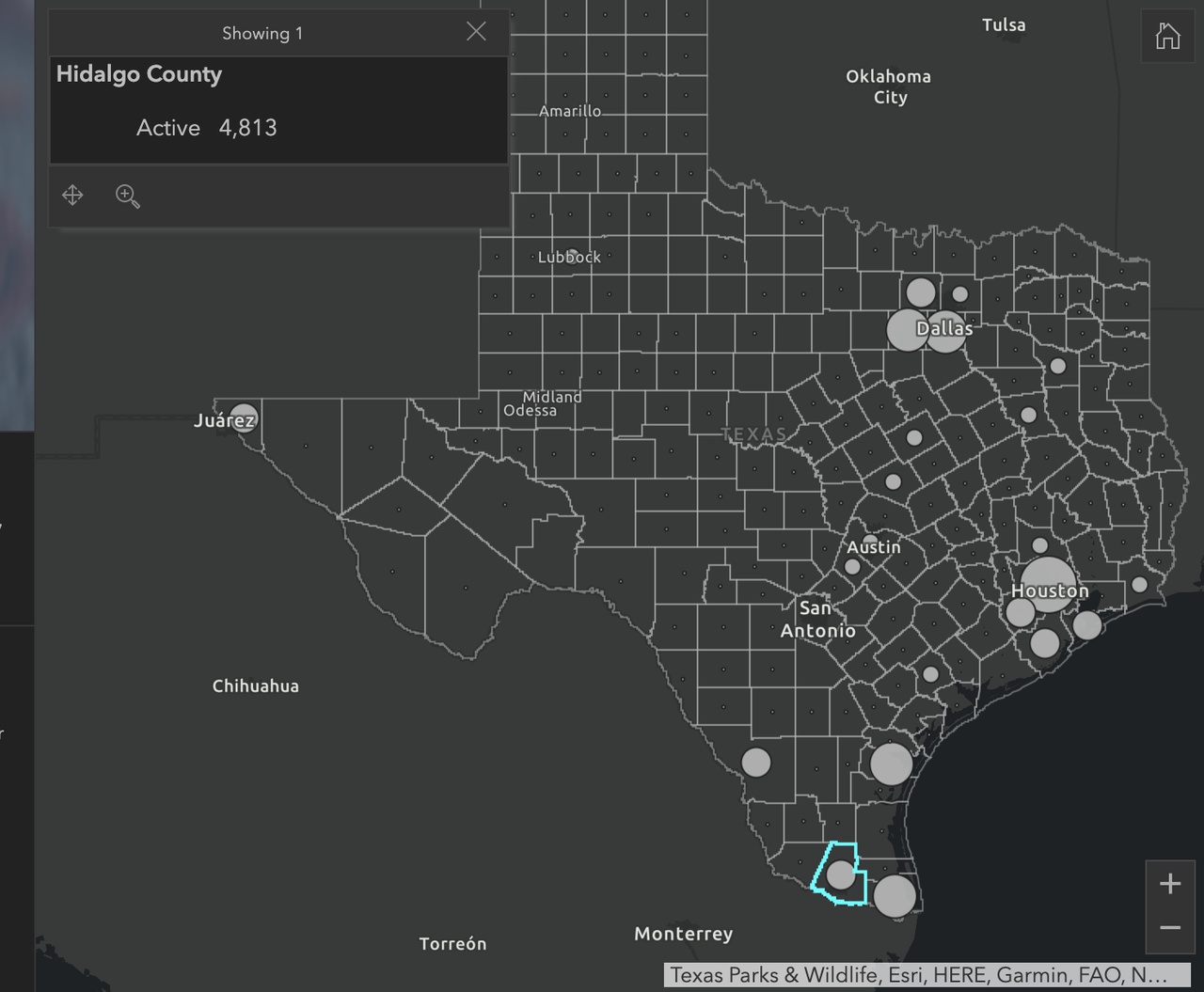 Down here, not far from the banks of the Rio Grande, the state’s failures to suppress the virus are starkly visible. Yet, nobody seems to care. The county with a population of 2 million people in South Texas has pleaded for a field hospital for months. But after two potential providers backed out, an operating field hospital was only just brought online to accept patients yesterday.

At DHR Health, one of the largest hospitals on the border, nearly 200 of the 500 beds belong to coronavirus patients isolated in two units, while an expansion for a third unit is in the works. There’s also a maternity ward where mothers routinely test positive while going into labor (though mothers passing the virus along to children is, as far as we know, extremely rare). Per the Texas state dashboard, the county has the 6th-highest tally of deaths in the state, ranking right behind Travis County, the home to Austin, Texas. In terms of deaths, Hidalgo has the fourth-highest count, with a total of 483. The rural county regularly pops up alongside Houston and Dallas and Austin, cities that have far larger populations.

As the AP reported, aside from being poor and mostly Hispanic, the county suffers from higher rates of obesity and diabetes, along with other health problems.

Health officials say the worst of a summer resurgence appears to be behind the state as a whole, but the border is a bleak exception. Doctors fear another punishing wave is around the corner.

This predominantly Hispanic region is cruelly vulnerable to COVID-19. The prevalence of diabetes here is roughly three times the national average, and households have among the lowest incomes in America, adding to the difficulty of thwarting the virus.

Even the weather has added to burden. The first hurricane of the season barreled over the border two weeks ago. At first, local officials hoped that the storm named Hanna would wash out family gatherings and bar crawls, slowing the spread. In reality, the system knocked out power to thousands of homes for days, driving families into closer contact with relatives whose lights remained on.

Local authorities are extremely frustrated and feel like they have been abandoned by Gov. Greg Abbott.

“We need the help. Our house is on fire,” Rio Grande City Mayor Joel Villarreal said. “We are no less American than other people in other parts of the country.”

Some nurses spend entire shifts calling around the state, searching for free ICU beds for the most critical patients. By the time a bed is found, it’s typically too late. Many patients don’t survive the helicopter ride.

Martha Torres, a nurse at Starr County Memorial Hospital, knows about searching in vain for help. She has spent entire shifts calling other ICUs in Texas to accept helicopter transfers out of her 29-bed unit. Some patients are sent as far away as Oklahoma City, and few survive after the long flight — leaving families with the burden of getting the bodies back home.

One entrance to the hospital’s COVID-19 ward resembles an off-the-shelf patio door, the kind sold at big-box hardware stores. Last week, Alex Garcia, 26, visited his father by peering through the outside window of his room. Both men are pipeline workers.

That same night, Emily Lopez was preparing for her mother’s funeral only weeks after her aunt died of the virus. The two had been playing bingo together before becoming ill, and two other family members were also hospitalized. “In this area, it’s not a joke. It’s life or death,” she said.

A Christian relief charity that opened a coronavirus field hospital in New York’s Central Park visited the border in mid-July with an eye toward building another facility. That never panned out, and neither did another idea to send patients to hotels. Last week, Gov. Abbott announced that a convention center in the county would be converted.

According to JHU, Texas’ outbreak ‘peaked’ on July 16, roughly 3 weeks ago. 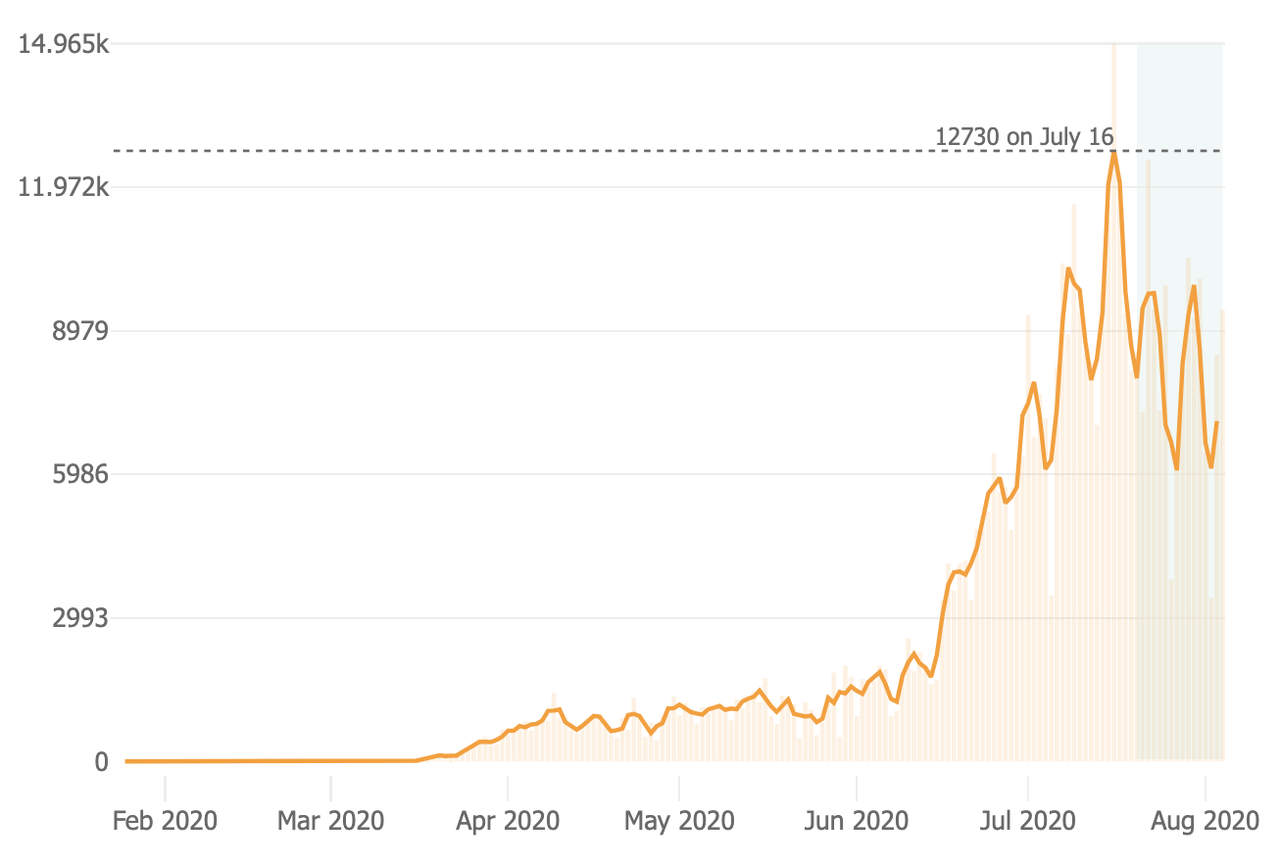 But even with the overflow capacity now on-line, health care workers are skeptical that the virus curve in the county can be so easily tamed. Maritza Padilla, DHR Health’s assistant chief nursing officer, there’s “no chance” of flattening the region’s infection curve.

Let’s hope for their sake that Padilla is wrong.