On the bright side, billionaire investor Leon Cooperman did not break down in tears during his appearance on CNBC today, but he had plenty to say that may have triggered much of America and sparked crying from the bulls.

The hedge fund manager explained why he thinks that the impact of the coronavirus has largely been shrugged off by the market:

“I don’t have any insight into the coronavirus, but I assume, with all the great minds of the world focused on this problem, that in three or four months this will become resolved.”

A somewhat stunning admission given how much we don’t know what we don’t know about the global supply chain and consumption impact of China’s viral contagion, and as Bloomberg’s Richard Breslow exclaimed earlier:

Not every problem can be solved by cutting rates or with additional quantitative easing. It’s a disease, not a housing bubble.

And even if, over time, more liquidity might soothe a slowing economy, it isn’t likely to work presto chango. And markets don’t have patience. Convincing people that nothing can go wrong is begging for a comeuppance. What central banks need to avoid is employing the wrong cure and being left with traders panicking because, “it isn’t working.”

But, Cooperman is worrying about something else that he believes is a much bigger threat to the markets.

“There are things that are very troubling to me.. No. 1 is Bernie Sanders.” 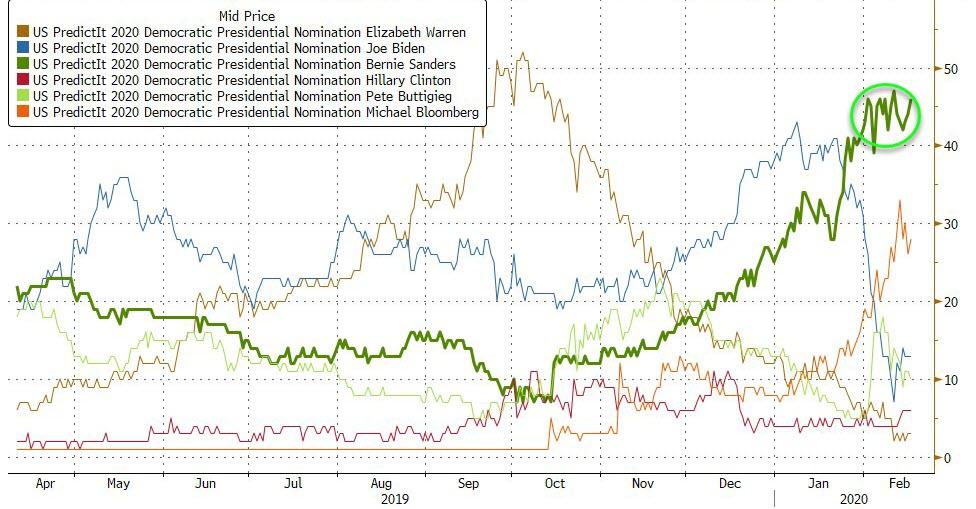 And that worries Cooperman (as he appears to have lost interest in Elizabeth Warren – who has collapsed to a mere 3% odds currently):

“He is not a socialist. He is, rather, a communist… I just hope the country isn’t ready to elect a communist or a socialist. If we do, I think the market is in store for a big problem.”

Aside from his anxiety over Bernie, Cooperman was his usual bullish self on the overall stock market…

“The conditions for a big decline are not present.”

Though he did admit that pullbacks and corrections were likely.

This isn’t the first time Cooperman has raised concern about the possibility of a Sanders presidency. In October, Cooperman said the market would crash by 25% if the Vermont senator or Sen. Elizabeth Warren, D-Mass., won the Democratic nomination.

Cooperman is not the only one on Wall Street worried about Sanders winning the Democratic nomination. Last month, DoubleLine CEO Jeffrey Gundlach called Sanders the biggest risk to financial markets in 2020.